At last, the time has come in this little experiment to get my bake on.

First, I had to pick a recipe for my traditional Lumberjack Cake, which was actually quite a task, given that I’d compiled over two dozen of them, from a wide variety of sources. However, I knew I wanted to stick with the apple/date pairing so that narrowed it down a little bit. In the end, I decided to go with the Australian Women’s Weekly recipe. I’m not sure why. Maybe because I believe my research strongly suggests that the apple/date pairing, as well as the name change, was a result of the recipe’s migration to Australia, and the source with the longest history in Australia (of the sources I had found) was the most fitting.

At any rate, this recipe, like many of them, calls for soaking the dates (and usually the apples too) in just-boiled water mixed with a teaspoon of baking soda. Although the baking soda is not strictly necessary, my understanding is that as the boiling water heats (and rehydrates) the dates, they release tannins that can add unwanted bitterness and astringency to the final product. The alkalinity of the baking soda counteracts this effect.

Because I wanted to stay in the spirit of the GKBO’s Cake Week, I skipped the square or round cake tin and opted for cupcakes instead. This recipe gave me 20 equally filled cupcakes – I checked! – that were on the smaller side of what I consider optimum, so next time I’ll go for 18. 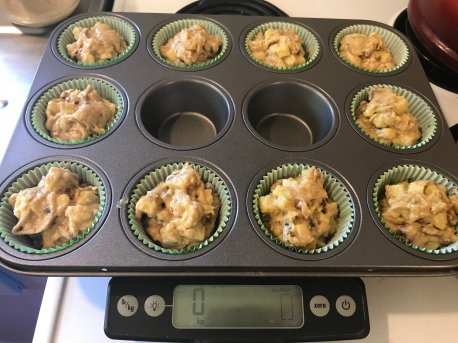 As the cupcakes baked, I assembled the topping and, here again, I would make a change to the recipe as written and add a bit more coconut, use cream instead of milk, and cook it out a bit more. 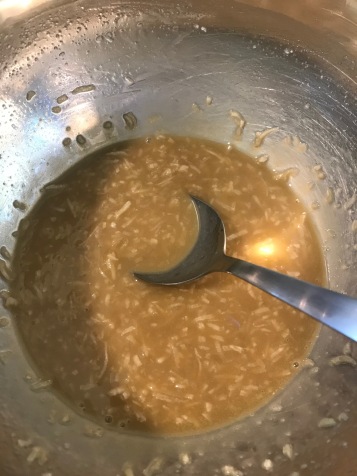 I only took it until the butter had melted and the sugar had dissolved, as instructed, and I found that the fat kind of drizzled down into the tin and made the paper all greasy – not exactly the most appetizing look.

I also found that returning the cakes to the oven once the topping was on didn’t actually produce the golden brown effect I wanted, so I ended up turning on the grill (or broiler, as we Yanks call it) and finishing them that way.

The result? Pretty damn moist and delicious, and I really like that butterscotch coconut topping, but the recipe doesn’t produce your typical cupcake-style crumb, and the topping doesn’t really replace icing/frosting, so what I got was really more of a muffin than a cupcake. A muffcake. Which of course is not what we will call it in polite company but that’s what we’ll call it in my kitchen.

Here’s the recipe as I’ve adapted it from the Australian Women’s Weekly: 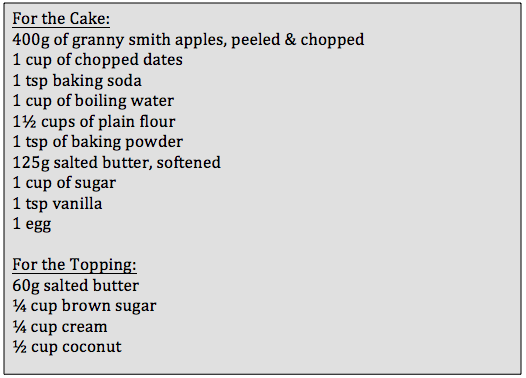 Preheat your oven to 180 degrees C and line your cups with paper liners.

In a small bowl, combine your finely chopped dates and apples. Sprinkle teaspoon of baking soda over, then pour boiling water over all and stir to combine. Let it all sit for about 10 minutes, at which point it should be barely warm.

In another bowl, sift flour and baking powder together. Set aside.

In the bowl of your mixer, measure out the butter and sugar and beat on medium until light and fluffy. Add vanilla extract and egg and mix well on low. Add apples and dates and all of their soaking liquid (there shouldn’t be that much excess, the dates should have sopped most of it up) and stir to combine. Fold in the flour and baking powder. Scoop or spoon the mix into your lined cups and bake for about 20 minutes.

While the muffcakes bake, make the topping by melting the butter in a small saucepan with the coconut, do this over medium low heat to toast the coconut a bit and enhance the flavor. Add the brown sugar and cream and let it just come to a boil. Reduce the heat to maintain a simmer for five minutes, then remove the pan from the heat.

When the muffcakes are pretty much cooked (a toothpick comes out clean), pull them out of the oven and switch it to grill (or broil, for the Yanks reading this) . Spoon the topping over the muffcakes and put under the grill and WATCH CLOSELY. You just want the topping to go all golden brown and delicious (or GBD, as we used to say in culinary school). Remember, we want caramelization, not burnalization.

And done! Remove from the oven, and let cool partially before removing to a wire rack to cool completely. The muffcakes will keep for up to 4 days in an airtight container.

Up next: my take on the classic Lumberjack Cake

Tell me what you think! Cancel reply

This site uses Akismet to reduce spam. Learn how your comment data is processed.